Dedicated to Promoting and Preserving Draft Animals in Montana

After a couple of cancellations due to the fact that the Jorden ranch was either under water or a giant mud bog, the weather cleared enough for folks to actually get in there and get some haying done.

One of the purposes of the association is to help youth find and enjoy the draft horse hobby.  This last summer we got a request from 4-H Ambassador Kaitlyn Boberg. She was wanting someone to sponsor them in the Judith Basin County Fair parade.  Henry Harrison jumped to the rescue.  He took two of his mules (Jenny and Judy) and his wagon and headed up to Stanford, MT.  Turns out it was the 75th anniversary of the fair and although in recent years there has not been a parade, this year there was an effort to revive the parade and, although small, it was well done and well received.  There are three 4H clubs in the county and each one had a float.  The Geyer, MT group had some members, parents and friends riding in his wagon.   Henry said his mules were pretty good, even though this was the first time he had hooked this particular team together, and everyone had a great time.

Once again - we had beautiful weather for our fall meeting and we went back to one of our favorite places - the county fairgrounds in Twin Bridges.  This year's meeting was attended by several new members and drivers who honed their skills Saturday with the obstacles followed by some fun racing in the Canadian Maze.  Sunday the group headed on to a local ranch and had a lovely drive through the hills and then back to the fairgrounds.

Horse Logging 101 - Oct 2020 - Roundup, MT
As announced at the MDHMA meeting at Twin Bridges in September, the Bilden's planned a logging event using their team of horses.  Due to our 'too close' proximity of the Bobcat Fire, and being evacuated, we planned it for the first week in October, and we were hoping to get a couple other teamsters, to help.  The response was overwhelming, considering the time of year, and wanting to get something accomplished quickly before winter.   Perfect 70 degree weather held for the 4 days our 'guests' worked beyond belief.  During the whole process, Emily Richards filmed the entire time, which she plans to use in a documentary!  So wonderful learning and visiting time from Sunday afternoon to Thursday morning with an incredible group of horse men and women.  We were also featured on the front page of the local Roundup Record newspaper!  The huge stack of downed trees is getting cut and chipped for firewood to keep us warm for quite some time.
Melody and Jim 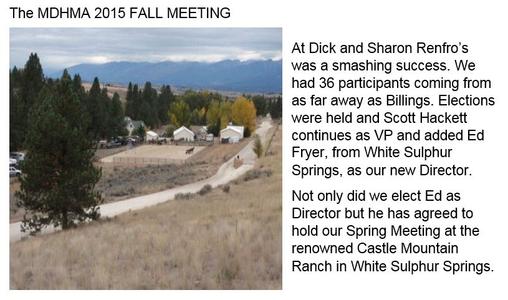